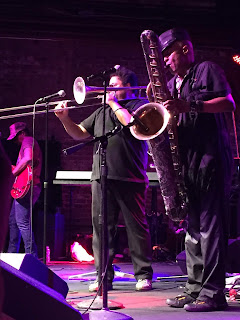 I stopped attending their shows after the birth of my son in 1995. However, I did not stop listening to them.

In 2017, my son told me Fishbone was going to play the Gramercy Theater and he asked if I wanted to attend a concert with him. I wasn't sure he was serious and did not give him an answer right away. When he came back a week later and asked again, I said why not.

Though I spent the entire concert sitting in the back, I enjoyed show. A year later, I saw them at Brooklyn Bowl and watched to show from the front like I used to.

Posted by Ursula at April 06, 2019
Email ThisBlogThis!Share to TwitterShare to FacebookShare to Pinterest
Labels: A to Z Challenge, music